Lurette is an Automatic Test Generator for Reactive Programs. The testing is automated in two main ways : (1) realistic input sequences are generated from non-deterministic formal descriptions of the System Under Test Environment properties ; (2) the test success decision is done with a formal description of the desired properties — correct behaviours — of the SUT.

In the past, we proposed languages and tools to automate this testing process [1]. The system under test is a black box ; it can be any executable code, able to perform on demand a reaction, i.e., read inputs ; do a step ; provide outputs. The environment is modeled using dynamically changing constraints on inputs described using Lucky [2]. 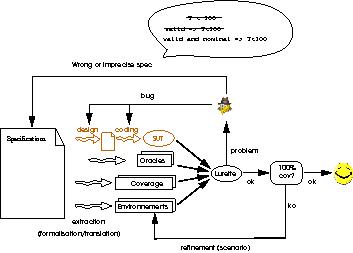