The installation of D-Finder requires the following steps:

News: a GUI for D-Finder has been available (for both Linux and Mac OS X). In DFinder directory, run the following script: ./dfinder-gui

in Terminal, go to D-Finder folder run the global methods by the following command:

or run the incremental methods by the following command:

in Terminal, go to D-Finder folder run the following command:

The Dining Philosophers problem, illustrated in Fig. 1 (a), can be shortly presented as a number of philosophers sitting at a table doing one of two things: eating or thinking. While they are thinking, they are not eating and while they are eating, they are not thinking. They sit at a round table and each philosopher has a spaghetti disk in front of him. Between two any next philosophers, there is a fork. A philosopher can eat if he has both forks from the left and from the right. And a philosopher can put two forks back to the table only if he has finished eating. Here there is a deadlock situation if they all have the same order of taking forks and every philosopher has taken one fork, so everyone can not eat because each has only one fork. 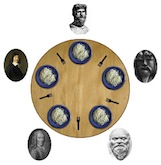 We have modeled the philosopher and the fork in BIP. Fig. 1 (b) represents the behavior of a philosopher: initially in state lth, he can think by think transition or prepare for eating by first taking the left fork (take_l transition) and moves to l1f location where he has one fork on the left hand, then taking the right fork (take_r transition) and moves to l2f location where he has two forks on both hands. At l2f he can eat by taking eat transition and moves to lfi location where he has finished eating, hence he can put two forks by put transition and returns to lt location. The think and the eat transitions are internal, they can be executed without synchronizing with other components and hence their ports are complete, represented by triangles in the figure. The other ports (take_l, take_r, put) are incomplete (represented by circles) and their transitions need to synchronize with other components to be executed.

The model of a fork is quite simple (Fig. 1 (c)): it has two locations lf and lu. Initially in the location lf , a fork can be taken by use transition and goes to lu location. From lu, a fork is released if the free transition is executed and the fork returns to lf location. Both ports use and free are incomplete. 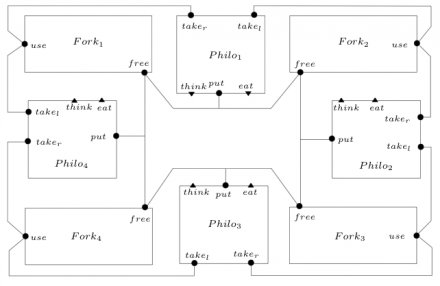 where th_i, t_li, t_ri, e_i, p_i respectively represent the ports think, take_l, take_r, eat, put of Philosopher philo_i, and u_i, fr_i respectively represent the ports use, free of Fork fork_i. In the incremental construction, these interactions can be obtained from the superposition of a set of increments, each increment adds interactions for philosophers from n_1 to n_2 with 1 <= n_1,n_2 <= n as follows:

For example, the set of interactions for a system of 4 Philosophers is the superposition of the two following increments:

The table below provides an overview of the experimental results obtained for the Dining Philosophers. For the columns: scale is the number Philosophers, comps is the number of BIP components, locs is the total number of control locations, intrs is the total number of interactions, Enum is the verification time by the enumerative method implemented in D-Finder 1, PM, FP, IPM, IFP are respectively times consumed by Positive Mapping, Fixpoint, Incremental Positive Mapping, Incremental Fixpoint methods implemented in D-Finder 2. NuSmv and Spin are respectively the verification time by NuSmv and Spin tools. Verification times are given in minutes. Timeout, i.e., "-" is one hour. 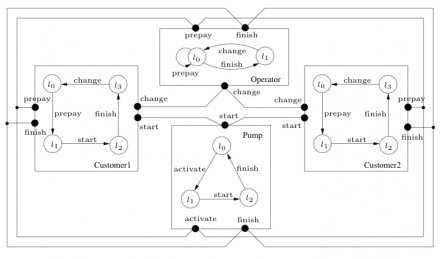 We abbreviate port names by using only their first three letters. The ports of Operator are respectively $pre$, $fin$, $cha$; the ports of $pump_i$ are respectively $act_i$, $sta_i$, $fin_i$ and the ports of customer_j of pump_i are pre_ij, sta_ij, fin_ij, cha_ij. The interactions for a system of $n$ pumps, each one used by $m$ customers, are

For example, the system of two pumps and two customers can be built from two increments, each increment contains interactions over a pump, a customer and Operator as follows:

The table below provides an overview of the experimental results obtained for Gas Station. For the columns: scale is the number pumps (every pum has 10 custumers), comps is the number of BIP components, locs is the total number of control locations, intrs is the total number of interactions, Enum is the verification time by the enumerative method implemented in D-Finder 1, PM, FP, IPM, IFP are respectively times consumed by Positive Mapping, Fixpoint, Incremental Positive Mapping, Incremental Fixpoint methods implemented in D-Finder 2. NuSmv is the verification time by NuSmv tool. Verification times are given in minutes. Timeout, i.e., "-" is one hour.

Automatic Teller Machine (ATM) is a computerized telecommunication device that provides services to access to financial transactions in a public space without the need for a cashier, human clerk or bank teller. The structural model of the ATM system is presented in Figure 1. The system is composed of the following components: User, ATM (modeling a cash dispenser) and Bank (modeling some aspects of bank operation). User and Bank interact only with ATM, but not with each other.

The table below provides an overview of the experimental results obtained for ATM. For the columns: scale is the number atm machines, comps is the number of BIP components, locs is the total number of control locations, intrs is the total number of interactions, Enum is the verification time by the enumerative method implemented in D-Finder 1, PM, FP, IPM, IFP are respectively times consumed by Positive Mapping, Fixpoint, Incremental Positive Mapping, Incremental Fixpoint methods implemented in D-Finder 2. Verification times are given in minutes. Timeout, i.e., "-" is one hour.

Robot Dala, an iRobot ATRV, has been developed at LAAS laboratory. It is composed of three layers (Figure 6.13): 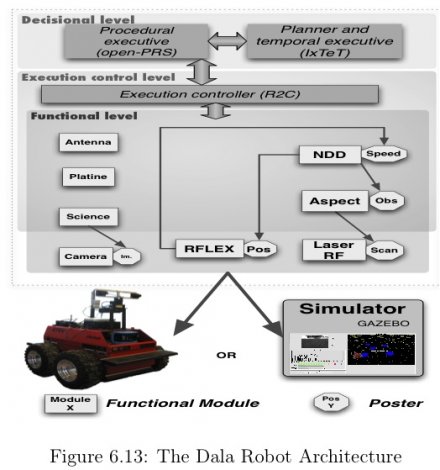 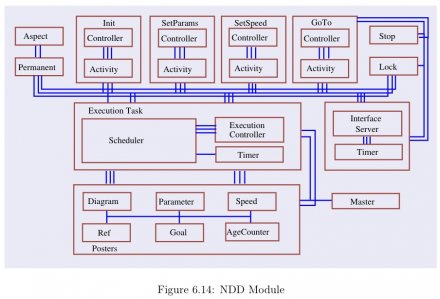 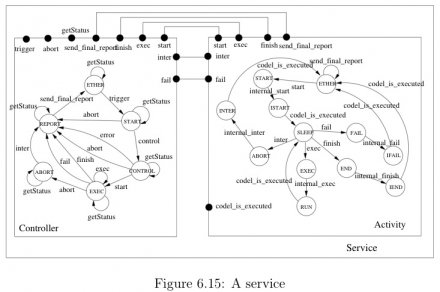 There are eight modules described with the BIP language that are running in DALA. Their functions are (1) collecting data from the laser sensors (SICK), (2) generating an obstacle map (Aspect), (3) navigating using the near diagram approach (NDD), (4) managing the low level robot wheel controller (RFLEX), (5) emulating the communication with an orbiter (Antenna), (6) providing power and energy for the robot (Battery), (7) heating the robot in a low temperature environment (Heating) and (8) controlling the movement of two cameras (Platine). All together the embedded code of DALA contains more than 500 000 lines of C code. The topology of the modules and the description of the behaviors of the components are complex. This is beyond the scope of tools such as NuSMV or SPIN. We first checked deadlock properties of individual modules. Both global and FP fails to check for deadlock-freedom. However, by using Incr, we can always generate the invariants and check the deadlock-freedom of all the modules. Table below shows the time consumption in computing invariants for deadlock-freedom checking of seven modules by the incremental method; it also gives the number of states per module. In these modules we have successively detected (and corrected) two deadlocks within Antenna and NDD, respectively.