The IF Intermediate Representation based on extending communicating timed automata has been defined for being able to offer a powerful toolset offering simulation, analysis and verification facilities for different modelling languages for distributed real-time systems.

IF plays thus the role of an intermediate representation between high-level standards and verification tools. This representation is expressive enough to capture most of the functional primitives existing in standard languages such as SDL and UML (parallel execution, communication media, complex data, dynamic creation and destruction, parameterization, etc) as well as non-functional aspects related to timing, performance and scheduling.

The IF Toolset includes front-ends allowing to translate different high-level modelling languages (e.g. SDL and different UML dialects) into the IF intermediate representation. Then it offers a number of backend tools for simulation and verification of IF models, and TGV allows generating test cases for a given test objective. 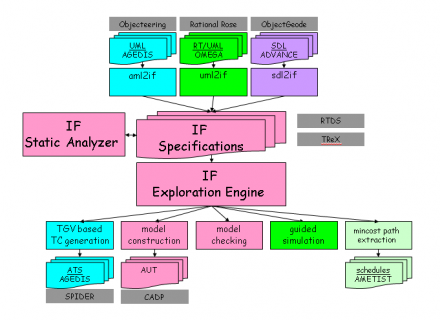 IFx is an extended version of the IF toolbox, developped in the OMEGA project.

IFx works on timed UML models written in the OMEGA profile with widely used commercial CASE tools like Rational Rose or I-Logix Rhapsody. The main functionality provided by IFx is:

Verification is performed on-the-fly in the IFx environment and allows the generation of diagnostic traces which can be inspected using the simulator.

The architecture of the IFx toolset is depicted below. The upper part shows the UML tools specific to IFx, while the lower part shows the components of the IF toolset, including some modules developed in the OMEGA project (in blue). 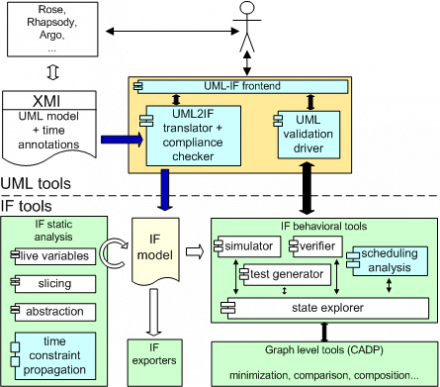 The main components of IFx, in addition to the IF tools, are:

The IFx tool has beeen used to validate the UML model of the Ariane-5 flight software, a case study provided by EADS in the Omega project. 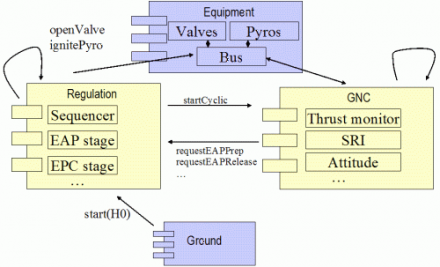 The architecture of the Ariane-5 model is shown in the figure below. Components drawn in blue represent the environment of the software: the equipment that is controlled, or the actors that interact with it from the ground. Components drawn in yellow are the modules of the flight software:

IFx has been used in this case study :

Below are some of the properties which were verified with IFx on the Ariane-5 model. They are expressed as observers.

Property 1: Between any two commands sent by the flight software to the valves there should elapse at least 50ms.

Property 2: If some instance of class Valve fails to open (i.e. enters the state Failed_Open) then:

Other examples IFx has also been used for the verification of timed safety properties in two other Omega case studies : MARS (Medium Altitude Reconnaissance System) by NLR and a Sensor Voting and Monitoring system by IAI. Details are available here. Resources and downloads

Download the tools here for one of the following platforms:

The following documents describe different aspects of the toolset:

The IF Toolset is available for UNIX-like platforms.

Check out from IF Toolset Git Project.

IF-2.0 Language: An Introduction

IF-2.0 Tutorial [presented at SPIN’04 Workshop]

A brief introduction to observers